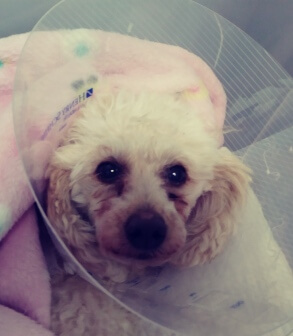 FHO stands for femoral head ostectomy. An FHO means removing the ball (head) of the upper leg bone (femur)  that connects with the hip bone so that the 2 bones do not rub together abnormally and cause severe pain.

It is a procedure to relieve pain. The procedure does not replace the hip joint. Part of the joint is removed. After surgery, scar tissue will eventually form a new ‘false joint’. That ‘false joint’, along with the muscles that surround it hold the  hip in place.

The Pet Health Network has a nice explanation of the FHO procedure here.

Audiopedia has a easy to understand video that explains the FHO procedure below:

The x-rays confirmed she needed FHO surgery. The cost of the operation was out of reach for her family.

Muphie was in a great deal of pain.

They love her so much…what could they do?

Muphie’s family was in a terrible position. Not being able to afford the very costly operation, they made the only choice they could to relieve her of her pain. With heavy hearts…they made an appointment to have her euthanized.

They were all devastated. She had been a very important member of their family for many years. Frustrated and desperate, Mom got out her phone and started Googling.

She clicked through and found they could come up with our cost for the FHO operation ($850-$1095). Our affordable pet surgery pricing saved a life and we could not be happier about it!

They live in Massachusetts, but were willing to travel to Virginia to save Muphie’s life. Mom called and spoke with a receptionist named Debbie who explained we would need her Veterinarian to send us the x-rays and notes recommending the surgery.  Shortly after that conversation, Mom sent an e-mail, making sure we had received everything.

Hope you are doing well. This afternoon I found out that my dog Muphie was going to need hip surgery due to her hip being dislocated for the second time. They stated that surgery was the only answer besides putting her down. Due to the high cost of surgery, putting her down was our only choice and that was going to be devastating to us. Muphie has been a major part of our family for so many years and the thought of having to put her down was tragic. While waiting for a call back from our vet to make the appointment to put her down, I found Helping Hands. I spoke to Debbie and realized that we do in fact have that second chance to save Muphie. I am very grateful and I am just making sure that Dr. Hayden from the Easthampton Animal Hospital faxed you her records this afternoon and I am also attaching her records from South Deerfield Animal Hospital.  Also Dr. Hayden attempted to put her hip back in place and it would not stay in the socket. Let me know if you have any questions at all. We are available to make the trip down there any time we are able to be very flexible and are so thankful for all your help.  If you can let me know the date and time of the surgery ASAP so we can make arrangement to get down there, that would be greatly appreciated.”

We received the x-rays and the notes on the case; our Doctor’s reviewed everything and approved Muphie for surgery.

Brittany called Mom and set up an appointment for that Friday. The family immediately began planning their travel and arrived early Friday morning for Muphie’s FHO surgery.

They were so grateful, and we were so grateful they found us and we were able to help! We all hugged and shed a few tears at Muphie’s discharge. When we called to check on Muphie the following Monday morning, Mom told Emily “She is actually getting better every day!“.

Ten years ago, Jacqueline Morasco and Dr. Lori Pasternak started Helping Hands Affordable Veterinary Surgery & Dental Care with the Mission that no animals go without the surgery or dental care they need due to prohibitively high costs.

By limiting what we do to ONLY surgery and dental care, we are able to offer these often very expensive services much more affordably.

We are dedicated to practicing this mission every day to help pets like Muphie and her wonderful family. We truly have the BEST job!

Dogs
Back to top